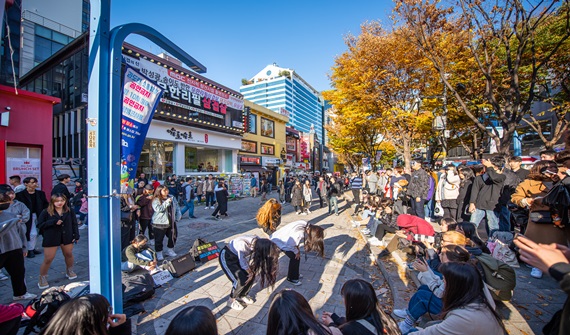 The street of youth that represents Hongdae is crowded with buskers from all over the country every night.Also, there are many pubs and meat restaurants near the plaza and the travel stage, which allow middle-aged people to visit Hongdae without hesitation.

Hongdae Street was created not only for pedestrians but also for artists, with the help of local artists. Various spaces tell us about it, including Sangjandari Park for rest areas for local residents, busking zones for civic artists who dream of performing on stage, travel stages, and square stages where everything about street performances is possible.During the festival season, the festival venue, looking for a place to perform.

In particular, as audition programs gained popularity, walking distance began to attract attention as a mecca for street performances, and many domestic and foreign tourists visit Hongdae at night due to guest houses, clubs, and shopping.Especially, from 2016 to 2017, local cultural artists and tourists will communicate as part of the Hongik University Street Culture and Tourism Specialization Project